4K monitors have been around for a while now, but 4K monitors that also come with built-in HDR support are still few and far between, making BenQ's brand-new EL2780U something of a rarity.

At 28in, this 4K HDR screen may not be the biggest Ultra HD monitor money can buy, but at just £300 / $500, it's arguably one of the cheapest that does HDR. Should you be considering the BenQ EL2870U for games like Final Fantasy XV or Assassin's Creed Origins over some of the other best gaming monitors I've tested so far? Let's find out.

Before we begin, a small (all right, extended) word about HDR on PC. HDR, or high dynamic range, is a bit of display wizardry that allows a screen to show a wider range of colours than normal and boost its contrast levels way beyond what you'd typically see on a non-HDR display, allowing for brighter, whiter whites, and darker, blacker blacks. It makes images look more life-like and is generally a very good thing that will improve the quality of whatever's being displayed onscreen, be it a TV or PC monitor.

The only problem is that, unlike TVs where you can't move for 4K HDR options, PC monitors have been much slower out of the gate. So far, there have only been a handful of 4K HDR monitors that have actually been announced, and most of them are rarer than hen's teeth if you want to actually buy one.

There's also a problem with HDR standards. While most of the announced HDR monitors support the open HDR10 standard, Nvidia and AMD have also thrown their respective oars in by introducing separate HDR support to their adaptive frame rate technologies, G-Sync and FreeSync, called G-Sync HDR and FreeSync 2. This means that a lot of the currently announced HDR monitors that come with G-Sync and FreeSync actually support two standards, which is much more of a headache than it really needs to be.

Fortunately, we only need to worry about HDR10 on the BenQ EL2780U, as this is just a regular FreeSync screen, not FreeSync 2. So what exactly is HDR10 when it's at home? This particular standard is pretty much the starting point for any modern HDR display, and requires a screen to have a panel with 10-bit colour depth (non-HDR screens only have 8-bit panels) that supports the Rec.2020 colour gamut, which is much, much bigger than the regular sRGB colour gamut.

However, you can only really appreciate HDR when the display is receiving an HDR signal, which in our case means when we're playing an HDR-compatible game that's being rendered by an HDR-supported graphics card (i.e.: all of Nvidia's GTX 900 and 1000 series cards plus AMD's R9 300 series, RX 400, RX 500 and RX Vega cards). The rest of the time, the monitor acts just like a regular monitor.

At the moment, there's no display in existence that can actually display the whole of the Rec.2020 colour gamut (about 75% of the entire visual spectrum), and there probably won't be for at least a good couple of years. Instead, it's best to view HDR10's Rec.2020 support as a bit of future-proofing rather than something that's going to completely revolutionise the way you play games this very second. Right now, the closest thing I can tell you is how much of the DCI-P3 colour gamut the EL2870U covers, which represents about 53% of our overall visual spectrum. sRGB, for comparison's sake, only covers around 35%.

Colour accuracy is only part of the HDR pie, however, as a display's maximum brightness level is also vital for delivering a meaningful HDR impact. The Ultra HD Premium sticker you may have seen floating around on top-end TVs, for example, denotes it can hit at least 1000cd/m2, which, considering your typical non-HDR monitor often maxes out around 300cd/m2, is pretty damn eye-searing. This isn't the case for all HDR displays, but generally higher brightness levels mean a better HDR experience overall. 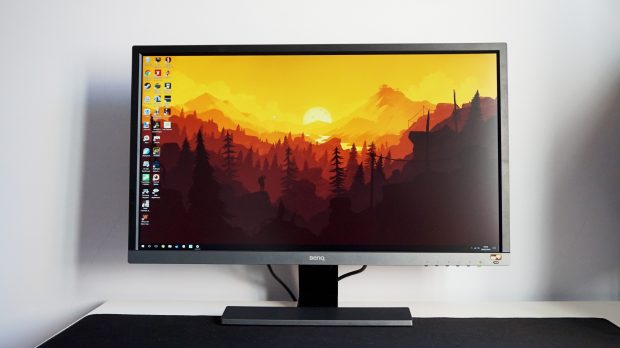 And it's here where the BenQ EL2870U falls down. Now, I'll admit that my usual testing software doesn't actually produce an HDR signal, so its peak brightness of around 280cd/m2 is only what it can manage when displaying non-HDR content. That's pretty typical of PC monitors these days, and more than enough for everyday work.

However, when I enabled HDR in Windows 10 and fired up the HDR-compatible Assassin's Creed Origins, it was immediately obvious that the monitor's brightness levels weren't hitting the kind of highs I'd expect from an HDR display. In a highly unscientific experiment, I decided the best thing to do was to leave my live measurement tool running in the background and stick my calibrator over one of Siwa's in-game sun flares, as this should theoretically be the brightest part of the screen if HDR's doing its job properly.

However, regardless of whether I had HDR turned on or off, each occasion only produced a reading of around 250cd/m2, which means you're not benefiting at all from HDR's potential brightness levels. Yes, it looked nice in HDR, but not noticeably nicer than playing the game on the monitor's regular Standard picture mode with HDR turned off.

To make sure it wasn't just Windows 10 being an arse (because let's face it, HDR and Windows 10 haven't been the closest of bedfellows either recently), I also hooked up the EL2870U to an Xbox One X. Using the same methods, I put my calibrator over yet another sun flare and lo and behold, I got another peak brightness reading of around 250cd/m2.

The EL2870U doesn't perform well in the brightness department, then, so what about colour reproduction? Well, this didn't make a massive impression either, to be honest, either on PC or on the Xbox One X. I could see the reds and yellows in Bayek's clothing were a touch more vibrant and vivid with HDR turned on, but overall the 'wow factor' was pretty minimal. In fact, it was only really noticeable when I looked at darker areas of the screen, such as Bayek's hair and his eagle friend Senu's feathers. Here, I could see a lot more detail in the blacks, greys and dark browns, but nothing particularly revolutionary.

A lot of this comes down to the EL2870U's rather middling colour gamut coverage, which is hindered further by the fact it has a TN panel (which generally aren't great when it comes to colour reproduction) rather than something like an IPS display. Again, my testing equipment doesn't specifically test for HDR or Rec.2020, but as mentioned above, it does do DCI-P3, which is what HDR TVs use to qualify for that coveted Ultra HD Premium sticker.

On its default, out of the box settings (which consists of the fixed Standard picture mode and Normal colour temperature setting with HDR switched off), the EL2780U managed 91.2% sRGB coverage and 70.3% DCI P3. That's not bad for a TN monitor in the £300/$500 region, but as a foundation for HDR it's shaky at best, especially with a contrast ratio of around just 900:1 and a relatively mediocre black level of 0.31cd/m2 (the closer to 0.00cd/m2, the better) on maximum brightness.

I was hoping its dedicated HDR and Cinema HDR modes might improve things, as these are meant to emulate the experience of HDR when the monitor isn't receiving proper HDR content. Alas, my test results came in even worse on these modes, hitting an average of 83% sRGB and just 62% DCI P3. These results were done using the monitor's DisplayPort input, too. Switching to its pair of HDMI 2.0 inputs, everything dropped by around 5% across the board, so you'll need to use the DisplayPort where possible to get the best results.

Of course, comparing the EL2870U's DCI P3 coverage to an Ultra HD Premium TV is rather unfair given the huge difference in price, but it's worth stressing that as an HDR display, the EL2870U doesn't really offer much over and above a regular non-HDR monitor. Instead, the real bonus at this price is the 4K resolution - although, again, it's worth pointing out that by the time you've enabled Windows 10's scaling to around 150% so you can actually read anything without squinting, you're not really getting much more screen real estate than a similarly-sized 2560x1440 monitor.

The EL2870U comes with a few other extras as well, including BenQ's brightness intelligence tech and low blue light filters to help out with prolonged office work, not to mention flicker-free to cut down on potential eye-strain and that aforementioned FreeSync support for AMD graphics card owners, but if you're mainly looking for an HDR screen to blow your socks off for gaming then the BenQ EL2870U probably isn't the screen you should be buying. It's a decent 4K monitor for those on a budget, but for those after something a little more special, the long wait continues.