Every time an HDR monitor arrives on my desk, I say a small prayer to the gaming monitor gods: "Please, PLEASE let this one be good." I don't care if it's hideously expensive like the Asus ROG Swift PG27UQ or Acer Predator X27, I just want one that does HDR well and does it without a boat load of fuss and settings twiddling.

Readers, my prayers have been finally answered, and they come in the form of the giant and ever-catchily named Philips 436M6VBPAB. This jumbo TV-sized 43in 4K HDR monitor is arguably one of the best gaming monitors I've ever laid eyes on - and if that wasn't enough, it also supports both Nvidia and AMD graphics cards and only costs £673 / $797 (or £530 in the UK as part of Scan's Christmas deals promotion). What more could you possibly ask for?

I must admit, I initially thought Philips' 436M6VBPAB was an AMD FreeSync 2 HDR display when it was first announced, but I've since had confirmation from Philips that its VESA DisplayHDR 1000 and Ultra HD Premium certified HDR chops can be used regardless of which graphics card you have in your PC. All you need is a graphics card that can do HDR, and away you go.

The only thing that Nvidia peeps can't take advantage of with the 436M6VBPAB is the monitor's adaptive frame rate sync tech, which helps to eliminate screen tearing while playing games if your graphics card can't quite manage a steady 60fps. Personally, that's not much of an issue for me and is something I can happily live without, but I know some will find its absence a bit of a deal breaker at this price.

AMD card owners, on the other hand, will be able to use this feature, as adaptive sync is to all intents and purposes the same thing as AMD's FreeSync tech. Its range is fairly typical of most FreeSync monitors around today, too (48-60fps, according to my PC's AMD Adrenalin graphics card software), so it's not like you're being diddled out of any extra frames due to it not being full-fat FreeSync. Instead, you're getting just as good stutter and tear-free support, plus the extra flexibility of still being able to take advantage of its excellent HDR chops if you decide to get an Nvidia card further down the line.

Indeed, the fact the 436M6VBPAB supports both flavours of GPU makes it something of a rarity in today's gaggle of HDR gaming monitors, as so far each one I've tested has been tied to either Nvidia's G-Sync HDR specification or AMD's FreeSync 2 standard. Thankfully, Philips have done away with all this nonsense for the 436M6VBPAB, making it one of the friendliest HDR screens you can currently buy.

Even better, the picture quality of its MVA panel (which is a particular type of VA panel tech) is pretty much perfect straight out of the box, which, let me tell you, is just blissfully refreshing after the faff and ambiguous setting tweaking of the Asus PG27UQ and Acer Predator X27.

Using the monitor's default settings, with the colour temperature set to 6500K, its gaming-related SmartImage modes turned off and its HDR setting on Normal (bizarrely there are also separate settings for its VESA DisplayHDR 1000 and Ultra HD Premium certificates, but more on that shortly), my X-Rite i1 DisplayPro calibrator showed the 436M6VBPAB was showing a whopping 99.7% of the standard sRGB colour gamut and an impressive 97.3% of the wider (and HDR standard) DCI-P3 colour gamut. That's exactly what I want to see on an HDR gaming monitor, and the fact I didn't even have to enable anything or fiddle about with its menu settings just makes it even more pleasing.

I was also heartened to see a typical maximum brightness of 664cd/m2 on the desktop, which then rose to 1070cd/m2 when I plonked my calibrator over the white hot sun in Assassin's Creed Odyssey and switched on HDR, and a black level of just 0.16cdm/2 (the closer to 0.00cd/m2, the better). Likewise, with a lovely high contrast ratio of 3983:1, there was plenty of detail present when it came to dark shadow areas.

Admittedly, I still had to fiddle about with some of Assassin's Creed's in-game settings to get the game looking its best in HDR, but overall it was still a much smoother process compared to other HDR monitors I've tested this year. Indeed, with its 1000cd/m2 screen, the 436M6VBPAB delivers exactly the same kind of impact in the HDR brightness department as the Asus PG27UQ and Acer X27 - at least when the bright parts are roughly in the centre part of the screen, that is.

While the monitor does indeed have local dimming built into its backlight (which allows it to make certain parts of the screen brighter without affecting the rest of it), it clearly doesn't have as many individual dimming zones as its Nvidia G-Sync HDR competitors, as the twinkling glint of the morning sun on Odyssey's rough oceans wasn't nearly as eye-searing on the outer fringes of the screen as it was in the middle. Still, considering Philips' offering is a fraction of the price of the Asus and Acer, it's a concession I'm willing to make in this case.

I also didn't see any discernible difference when I started playing around with the monitor's individual HDR settings, either. For some inexplicable reason, there are separate settings for 'Normal' HDR, its VESA DisplayHDR 1000 certification and its Ultra HD Premium (abbreviated to UHDA, or the Ultra HD Alliance in charge of the UHDP standard), presumably because the latter two specifications are ever so slightly different and some mad folk might want one lot of settings as opposed to the other. To my eyes, however, they all looked exactly the same in Assassin's Creed Odyssey, so you're probably fine with leaving it at whatever setting you like. Just remember you'll still need to enable HDR in-game as well in order to get 'proper' HDR, mind.

Truth be told, the monitor's overall colour vibrancy still looked richer and deeper with HDR switched off compared to when it was turned on, but given that this has been a problem with EVERY HDR monitor I've tested this year, I'm beginning to think it's more to do with the games themselves not utilising the full breadth of the DCI-P3 colour gamut than a fault with the monitor per se (apologies to the Asus, Acer and many BenQs that I've despaired over this year as a result). Indeed, as you can see from my calibration results above, the 436M6VBPAB is clearly capable of displaying the DCI-P3 colour gamut in almost its entirety, so it might just be that Assassin's Creed Odyssey, Final Fantasy XV and the rest of my HDR test cases only do the brightness bit of HDR rather than the full colour gamut side of it.

That's still rather annoying, of course, but much like the Asus and Acer's G-Sync HDR monitors, the Philips 436M6VBPAB's naturally high brightness levels do help mitigate this to some extent so that, even without HDR turned on, games still look pretty damn amazing. After all, you're still getting near 700cd/m2 brightness spikes in non-HDR (I saw a high of 690cd/m2 when I put my calibrator on the sun in FFXV, for example), which to my decrepit eye sockets makes just as much impact as the full 1000cd/m2. Plus, 700cd/m2 is still considerably higher than most other HDR monitors out there in this sort of price range, such as the £400-500 / $550-700 FreeSync 2-ified BenQ EX3203R and AOC Agon AG322QC4. 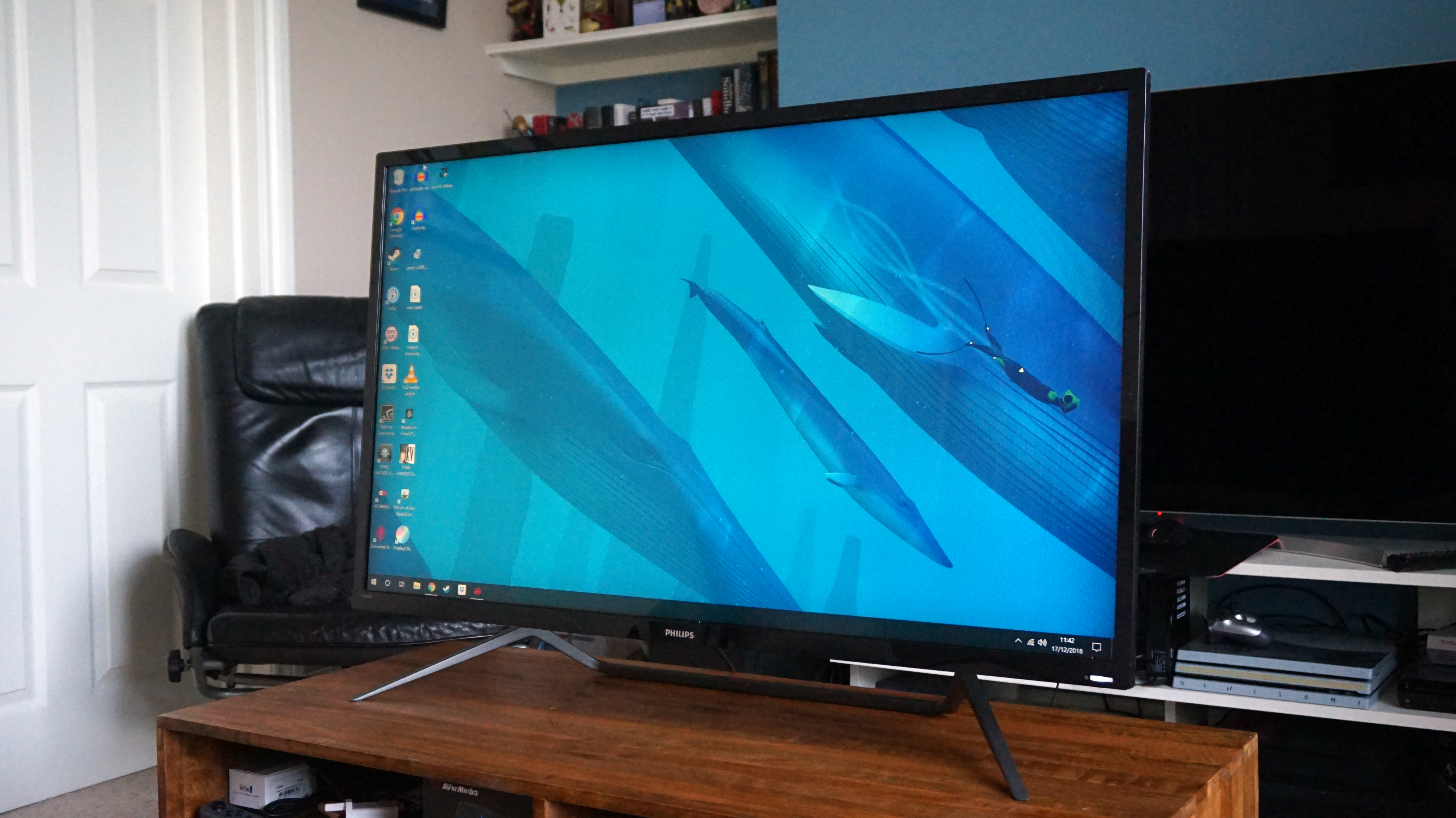 For me, this is what makes the 436M6VBPAB so appealing as a 4K HDR gaming display. It's got all the same brightness and image quality chops as the two grand plus Acer and Asus G-Sync HDR screens (albeit without the same number of dimming zones), but it's cheap enough so that any underwhelming implementations of HDR in games don't feel nearly as disappointing or like such a colossal waste of money. A small consolation for some, perhaps, but after a year of lots of mediocre HDR gaming displays, the Philips 436M6VBPAB feels like the best outcome we can hope for right now.

There is, of course, the small (or should that be large?) matter of it being a massive 43in across the diagonal. This is not a monitor you're going to be using on a day to day basis for regular office work (although just think of the spreadsheet potential...), as it's just simply too big and bright to sit in front of for longer than 30 seconds at a time, even if you do turn the brightness right down to something less blinding. Really, this belongs in your living room, or at least somewhere that's far enough away for you to sit on a sofa / comfy armchair / propped up in bed with a controller / lapboard instead of a mouse and keyboard.

That will obviously limit its charm for some people, but I do like the idea of TV-sized monitors in general. After all, I haven't watched any actual live TV on my TV for years, as we tend to watch everything through catch-up apps these days. Moreover, monitors have nice things like DisplayPorts and greater capacities for high refresh rates and stuff, which TVs simply don't offer yet. The Philips may still be limited to a refresh rate of 60Hz in this particular case, but would I like to see a 43in HDR monitor with a 2560x1440 resolution and 144Hz refresh rate? You bet your bottom dollar I would. I'm not saying TVs are null and void now we're starting to see giant monitors like this start to come through, but they're also not quite as silly as they might first appear - and Philips definitely make a compelling case for them with the 436M6VBPAB.

HDR games may still have some catching up to do, but the Philips 436M6VBPAB is a damn fine gaming display no matter which way you slice it. Its picture quality is superb, its high brightness stands head and shoulders above its mildly cheaper competition, and best of all it's a monitor for all types of PC gamer regardless of what kind of graphics card they've got tucked away in their machine. AMD card owners will naturally get the most out of it due to the lack of adaptive sync compatibility for Nvidia peeps, but it's still great value for money whichever card you happen to own. It's our new 4K HDR gaming monitor champion.