I need a break, readers. I am theoretically planning out my year, but I've been planning the plans instead and oh lord how does a life this boring have so much stuff in it?

It's a coincidence, but this week's Unknown Pleasures, our round-up of the best indie games recently released on Steam, is a mostly low-intensity batch, with minimal planning required, so join me! Rest your bureaucracy lobes and indulge in some excitement. We've got thrills, we've got spills, and - I've just been informed that we can only mention one spill, for legal reasons.

Living on the edge this week: rail hoppers, hero swappers, and robot stoppers.

War Rogue! Space Star! Dead Empire! I am never, ever going to remember this name. Rogue Empire is close to formulaic, but makes a success of it. An old-fashioned, grid-based dungeon crawling RPG, yes, but an accessible, lighthearted, and easy-to-play one. There are several game modes and optional stories, so experiences will vary a bit even before you choose a player race and class (levelling happens mostly automatically, with a few perks and stat nudges to diversify playthroughs). The nuts and bolts remain consistent and will be familiar to most of you. Newcomers ought to get into the swing of things quickly, as the interface adheres to some simple principles and a minimum of fuss. Move around with the number pad (or clicking), walk into monsters to attack. P to pick up, E to use stairs or leave areas. The combined inventory/stat/etc screen is chunky and clear and does what you expect.

Delve into dungeons, fight monsters, pick up better gear, chug potions, read scrolls. There's no need for the fiddly bits like identifying spells, and you can often just kick down a locked door. I've yet to feel hosed down by cruel tricks or pointlessly slim odds.

We like ambitious things here at RPS, and the merciless trials of Unknown Pleasures particularly favour the bold and outlandish. It's important to remind ourselves now and then that it can be enough to make a fun game. And that dungeon crawlers don't have to be so bloody miserable.

Is pinball still a thing? It had a following in the arcade days that seemed a little hard to believe even at the time. I feel a bit underqualified, as the old poke and flip was never my scene (Pinball Dreams was the business, mind.).

This, though, is something different, and not just because the laws of the column demand that its name be bellowed. DEMON'S TILT takes a decent, if elaborate table and adds a bit of shoot 'em up, and even a dash of bullet hell. The result is curious but works. The lone table (more are planned) is a triple stacked beast. Each section features its own rails, bumpers, targets, and challenges. Meet a challenge, such as hitting specific pins or riding the correct rail, and a "ritual" begins, altering parts of the board, summoning monsters, and boosting scores and multipliers. The most impressive numbers come of aim and timing practice, but you can do fine and cause plenty of lively animated havoc by slamming the ball(s) towards whatever takes your fancy, or just keeping them out of the drain.

It's chaotic and promises lots of secrets, but also forgiving enough for beginners. I've no idea how it compares to the tangible cut and thrust of a real slappy-spring bash-board, but it's certainly a tremendous game.

A standalone spin of from Synthetik: Legion Rising. Not the twin stick shooter it appears. Arena is a mite tricky to summarise fairly. A top down semi-arcade tactical-ish shooter in which you pick a class and a game mode, and stride about a shooting gallery fighting off waves of robots, or hunting bots for cash. The pace is measured rather than slow, the combat intense and difficult but not exactly frantic, nor is it punishing.

At heart it's about how you handle your guns. Taking time to aim is crucial, but a luxury in the face of incoming fire. Class powers and items can cause a right robo-ruckus but they take time to recharge, so bunging a flashbang at the wrong moment might interrupt the cyborgy. Empty magazines must be ejected via a separate button from the ensuing reload (which includes an active reload system that I'm still amazed is so rarely copied from Gears of War: Pressing reload again while changing mags will either accelerate or interrupt the process, depending on your timing. It's an innately good system but fits Synthetik perfectly), inviting the terrible faux pas of ejecting a full clip* in a panic.

This lends a rare tension to the fights. Classes dictate your choice of weapons (bought from gun shops, which enemies have a maddening habit of clustering around) and special abilities can drastically change a play style. The sniper's laser sight seems like madness when you've come to rely so heavily on the assassin's cloak and vampiric dagger.

The UI has some frustrating habits - shop menus appear a bit unreliably and it's difficult to make sense of the wealth of items and upgrades mid-game. I sense that the devs have co-op most in mind, but it doesn't suffer for it, and it's certainly worth your time for free.

FutureGrind is a game in which you pilot a flippy spin-glide glowy bike thing across neon coloured rails.

More? Oh, honestly, you lot. Your bike is set on two glowing discs, and travels by grinding along, under, or hanging off the rails your employers have thoughtfully set up. It's a little like Jet Set Radio, and more like those motocross games where you flip a motorbike about. Points are scored by spinning your axel and hitting the right kinds of rails - should your blue disc touch a pink rail you'll explode. You will do this many, many times. Tapping R (controllers work fine too - there's nothing between input devices here, it's too simple) instantly restarts the track, minimising the irritation that would otherwise sink FutureGrind.

Simple, clear, satisfying to play, quietly attractive, and a pleasure all round provided you can accept that you'll mess up a lot and it's always your own fault. It goes one further by throwing in a story about the sinister secrets of the people you're doing all this for. This is kept out-of-the-way, in texts between missions that gets to the point and interrupts nothing. A bit of a hook isn't strictly necessary, but it helps.

The music is pretty great. I struggled with differentiating some colours, especially at the periphery, but I died just as often by oafishly smashing pink first into a green rail, so who knows.

It's Sun Wukong again! Our Great Sage teams up with his usual posse, this time in a punchy side scrolling action in the Trine mould (unstoppable news uzi Dominic Tarason reported similarities to Rayman Legends, a series I've never touched). The player controls one of the original gang of four, jumping and bashing and rolling until someone else's talents are needed. A tap of the right button (controller recommended) swaps that character out for the next one on the spot. Sanzang floats over wide gaps, while Wujing bashes down walls and Wukong is agile and handy in a fight. There's redundancy, to keep you in the game if you lose a character, and they're easily restored.

Light puzzles come into play with the shrines, which require specific characters to activate - Wukong can resize his famous staff to bridge chasms, and Kihong inflates to float up through otherwise impossible passages. I particularly like the strange glowing pods that reveal invisible scenery to climb on when struck - and render ghostly monsters vulnerable if they pass by. There is, again, a co-op option that I've not tried, but it's not necessary.

Pick of the week: Not the easiest decision, but Unruly Heroes takes it from its sliiiightly flawed competition. 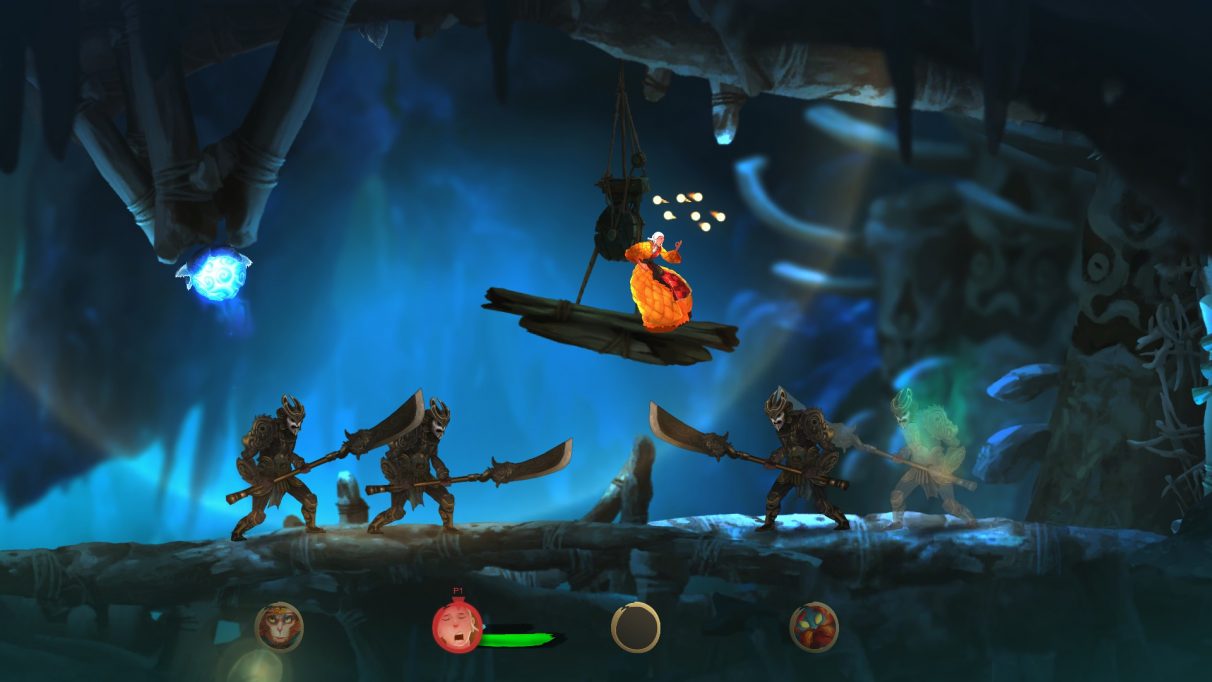 I deliberately failed to mention the plot and the truly gorgeous art and animation so I could do it here instead. Wukong/Monkey is a bit of a jackass in most media but here his travelling companions are outright heroes saving the world. It works here, and is reflected in the beautiful character art. Wukong in particular looks and feels terrific on the move, and platforms swing and crumble and tilt under the player's weight in just the right ways. Unruly Heroes is a joy to play.

I hope I've helped you plan your videogaming, my dears. As for me, I plan to lie on the floor thinking about nothing for as long as I possibly can. The fun never stops.